As the blog title states, I am down 32lbs, but probably not so much after this night of drinking red bull and vodka. Damn the empty calories in booze. Luckily though I drank calorie free red bull, so I’m good there at least!

If it wasn’t for my damn birthday, I think I would be down to probably 195lbs instead of 198 from 230. But I will take what I can get. Nutrisystem will be over in a month, but I will be starting up on bioscience for 90 days so I hope to lose the extra weight through that. I want to be at a healthy, ideal weight for my body type and hopefully in time for my trip to Vegas in October. I cannot wait!!! I’m stoked I get to spend it with people I am close with who know how to have fun. I just hope there are no freak out dramatic episodes since one of my friends is really self conscious about their relationship. In a way I can relate to her since my boyfriend and her boyfriend are pretty much twins in a sense that they share the same brain pattern. I have learned after 6 and a half years that this is how he is. I have, however, toned him down a bit by telling him that the things that he does irritates me to no end, so he’s calmed down a bit.

Anyways, yay for weight loss. I cannot wait to be down even more!

This last weekend, we had dinner plans with our usual party friends for Cinco De Mayo. So of course we had Mexican style food, and I made margarita cupcakes that were pretty delish.

But after this night, I am starting to question where we stand with them as people. They were pretty much talking behind one of their good friends back about how his girlfriend is horrible and they hate her, bash bash bash. I have met the girl, I at first thought the way she talked was kind of “nose in the air” so to speak, but I’ve met her multiple times and that’s just how she talks. She has been nothing but nice to me, so I have no idea why they’re all of a sudden hating on her, but I assume its because their friend “the boyfriend” of this said girl has kind of isolated himself away from them. I imagine it’s because they told him that they don’t like her, which I would too. These people are older than I am, some twice as old and I am starting to realize that people never grow out of that high school “bullying, judgmental” stage and it’s quite sad. I’ve done it in my time, but I am not that quick to judge and belittle people.

They ended up putting her head on the boss from dukes of hazard since they said she resembled him. I recall doing this once to my friend but I showed her, and now that I take a look outside of the box, I realize that this is just childish. I told them that I was afraid to see what they stuck my face to since they openly admit that they talk shit about everyone, so there’s no denying that they’ve done it to my boyfriend and I.

Now the question is, do I want to continue to associate myself with these kind of people that have nothing better to do than to humiliate people behind their backs?

On a more positive note…

I have lost 23.4lbs and I am hoping I go down another 17lbs in the next 2 months. If I keep exercising on the elliptical that we bought, or continuously go on hikes on weekends it’s nice, I think I can easily reach that goal.

I took some before and in-between progress photos that I won’t share here, since they are vomit inducing, but I can definitely tell a difference even though my pants size hasn’t necessarily gotten any smaller. I do notice they are a bit baggier, but I can’t tell if it’s because of the stretch in them or what.

I can wear my favorite pair of jeans that got too small for me though, so I guess I am beginning to see a pants size change. I have been holding off on buying new clothes until I get to where I want to be, so I hope it comes sooner rather than later, since I don’t know how long I can hold out on my shopping addiction!

I think I am going to start doing a neat recipe to share with all of you on Fridays, when days are slow or unproductive for me. This one I found on Facebook by friends and I plan on making this the next time we have a shindig or are invited to one. Unfortunately, it’s going to take a lot of orange killing to provide such beauty, but I can always bag the remains and stick them in the freezer and eat at a later date.

Orange Peel Jello-Shots: Cut an orange in half and gut it. Mix the jello shot (1 cup of hot water, 1 box of jello and 1 cup of liquor of your choice [e.g. rum, vodka, gin, whiskey]) and stir until dissolved. Then add the jello mix to the half-shell and refrigerate for 3 or more hours. Once solid, slice and serve!

Repeat this process for each orange. 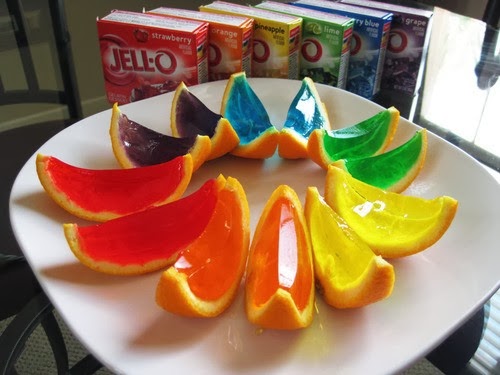 Stay up to date in real time by downloading my easy to navigate toolbar. You won’t ever miss a freebie or deal again!

Today is week 10 on Nutrisystem and I must inform anyone who wants to get started on Nutrisystem that you may have digestive issues. Half of the meals are dehydrated, and my stomach has finally toned down on the gas and the really bad bowel movements that were extremely painful. I am not sure if it’s because of the food or if it was something else but it lasted about a month. I think I have finally gotten used to consuming the food, so everything is in good working order. Now, just because I have had these issues, does not necessarily mean you will. Everyone’s body is different, but I figured I should probably give a heads up if you wanted to try this as a weight loss resort.

Stay up to date in real time by downloading my easy to navigate toolbar. You won’t ever miss a freebie or deal again!

Save on baby and kids items with these promo codes