I played MyVegas enough to snag this awesome Tower Suite Room in the Mirage Hotel & Casino in Las Vegas for 1 night. I can’t remember how many loyalty points it took, but it is no longer available for purchase and has been that way for 6 months or more. I doubt they have any plans on bringing it back since it was so easy to achieve, which makes them lose out on a crap ton of money since everyone was going for that free room reward. 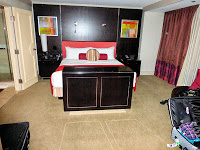 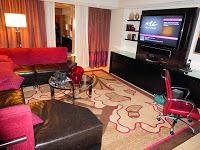 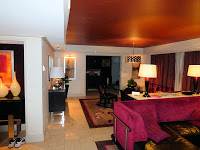 Once you purchase a reward, you have 90 days to book it before it will expire, and yes, you will lose your reward along with your points you used to redeem it. So make sure you have a date planned and get it booked within 90 days. Now, that doesn’t mean the trip needs to be within 90 days. You can book it as far out as 6 months, maybe even more. Once you receive the email for your redemption process, call the number, give them your Mlife number and confirmation code number and they will get the room reserved as easy as that. They may ask you for a credit card. I’ve only had 2 do it to me, and the other never did. To me, I don’t see why they need it, when you’ll be giving it to the front desk check-in clerk at the time of arrival anyways. If you’re not okay with giving them your credit card number over the phone, just hang up and call again and you’ll get a different operator. 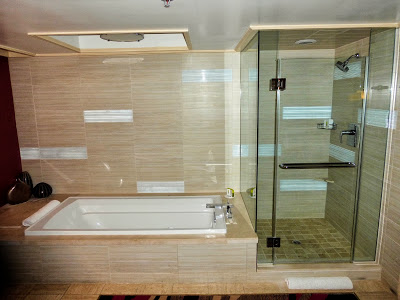 Now, I also had a 2-night room reward for the Deluxe King at Mirage through MyVegas. Our whole plan was to try and get the tower suite for all 3 nights that we would be there. It was close to our anniversary, but we never did any $20 or $50 trick to get an upgrade for free. The guy at check-in said excuse me, but I’ll have to go make a call behind closed doors. After about 5+ minutes, he comes back and says we can give you the room 2 extra nights for $100 per night. I figured it would be $50 extra per night, but my husband wanted the room, so he gave in and said yes, we’ll take it. Much to my surprise, the extra $200 was well worth it. This room is the nicest and biggest room I have ever stayed in period. It’s 1200 sq feet, which is bigger than most apartments and some houses!! I wished my downstairs area was as big as this place was.

It was really great to have a big area since we were there with some friends. We can’t very well mingle in a deluxe king room and drink booze before heading out to the strip comfortably. I didn’t take pics of the separate bathroom, but it had a bidet in it. And you bet your sweet ass I used it! I had never seen or used one before, so I had to give it a whirl. 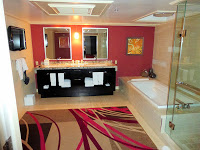 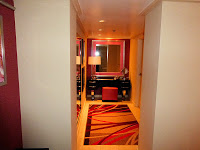 The beds were comfortable, maybe a little too plush for my husband, but he likes his beds firm.

Having a separate powder area for us girls to get ready was nice. Although, we kind of blocked the bathroom, since it’s RIGHT THERE.

The bathtub was big enough for my husband and me to sit in it together. There’s never big enough tubs for us both to sit comfortably. I wanted to take it home with me!!

The couch was not at all comfortable. It’s not cushiony at all and was more like sitting on boards. I guess that wasn’t too much of a deal breaker because we weren’t there to sit on the couch. We mainly hung out by the wet bar and when we weren’t there, we were out on the strip.

The water pressure was also great. There’s one thing I’ve noticed about Las Vegas hotels, and that seems to be the weak water pressure in most hotels. Not so at the Mirage! I can actually get the soap off my body and out of my hair without staying in there for 30 minutes. 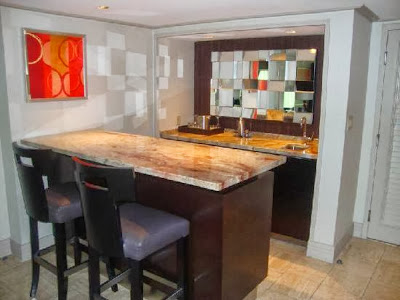 Overall, the MyVegas redemption was an easy process. And getting the tower suite for $200 all 3 nights came out to about $66.66 per night, which is one hell of a deal! This room normally goes for $400 per night. Now when I go back to Vegas, I am going to be comparing all of my future rooms to this one and I have a feeling it won’t even be in the same ballpark.

Thank you to MyVegas and Mirage for making our stay pleasant!