Have you ever ordered food online and had it delivered to your door before? I absolutely hate going grocery shopping, so I opted to try Schwan’s Home Service just so I could avoid the store for a week.

I browsed the site a bit and picked out the best sounding meals which included the chicken enchiladas, the orange chicken skillet, meat pizza, the blackened chicken alfredo with fettucini noodles and of course I couldn’t forget my sweets; strawberry cheesecake ice cream and chocolate peanut buttercup ice cream. As soon as I got to my cart and tried to check out, I noticed that the only option was to pay to have it shipped to me, not the free service where they come right to your door with their freezer truck. This struck me as odd because I’ve seen the Schwans guy drive up and down our street before. After a couple weeks past, the service mysteriously appeared for my area so I finally got a chance to place my order, however, delivery wouldn’t be for another couple weeks.

My food was finally here!

The Schwan’s guy was very nice but I didn’t like that he tried to up-sale me more stuff as soon as I opened the door. I mean, if I wanted to order more items, wouldn’t I have done so in my initial order? This was my first time trying Schwan’s so I didn’t want a big giant bill nor the food if I thought it was sub-par. So I respectfully declined. He then went out to the truck and proceeded to find my food. Took about 10-15 minutes but everything was there.

The following day, I decided to try the chicken enchiladas. The seasoning and flavoring was pretty good and it was decent sized for 2 people only, anymore than that and you would probably still be hungry. So seeing as it says this is suitable for 6 people is laughable. Maybe if you added a bunch of sides to it like pinto beans and whatnot. Also, there was not much chicken in this, mainly just rice, so that was unfortunate.

I also tried the orange chicken skillet. Figured I would prepare it for my husband and I. I looked down at the pan and realized that this wouldn’t be enough to fill my husband and I both, he has a meatier appetite. There wasn’t that much chicken to make it a successful dinner for 2, so I had to make him a separate meal. I did not eat the entire contents, there was a tiny bit leftover, but I still feel like its not suitable for 3 people as it claims. Maybe if you’re used to super tiny meals. It did taste pretty good though. Loved the orange sauce, but I am partial to Chinese food. The chicken, however, tasted processed like a chicken nugget. 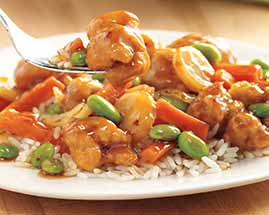 The only other thing I have tried is the chocolate peanut butter cup ice cream and it is GOOD! But, I feel like you could get the same thing at the store for way less. I guess it’s up to you if convenience is worth it to you. 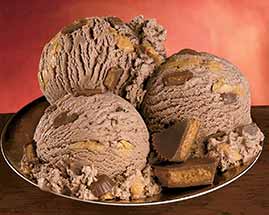 I may give Schwan’s another try, but I am going to carefully read each review to make sure it’s actually well worth it as the meal portions seem awfully small for the price.

I’m also not looking forward to the Schwan’s guy coming back every 2 weeks to ask if I want anything. I don’t like to be annoyed by salesman, so hopefully I can opt out of this if I choose.

Do you order from Schwan’s?