I’ve been to Dixie Tavern twice now, both times with my cousin who seems to think this place is awesome. Let me say, it is far from it.When you walk in, you will be greeted by an $8 cover charge. I don’t normally come to Portland to go to clubs, but I figured I’d give this a try and was appalled at the price to get in. You will also probably see the staff up on the bar dancing or the drunk and uncoordinated ladies who came to Dixie for their bachelorette parties. 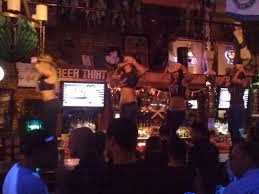 The first night I went, I hadn’t drank at all, so I wasn’t buzzed, drunk, or anything of the sort. It was really awkward and I couldn’t get into the music at all. Who the hell can dance to Bon Jovi, “living on a prayer”, or “Cherry Pie” by Warrant, Miley Cyrus, Country? (which they played both times I was there, same damn music playlist, are you kidding me?) I didn’t come there to relive my mothers child hood days of butt rock music. I wanted to dance to something with a good, funky beat like more hip hop, electronic/dub-step type.

It also takes a long time to get a drink since there’s so many people in there packed like sardines. The place is not very big at all, but luckily they had an upstairs area where you can go have a seat if you’re not feeling like dancing much and an extra bar. You will probably be served a lot faster if you squeeze through the crowd and head upstairs. The drinks, however, are weak as crap. I had about 5+ drinks and I didn’t even get a slight buzz. But isn’t this the norm at Clubs? Charge outlandish prices for craptastic watered down drinks? I think so!

If I get dragged here again, I will probably crop dust everyone, seems to be the cool thing to do here since we ran through stink clouds more than a few times in one night. If you got gas, go take a crap, don’t kill us all with your stank ass.

We headed to the next club since it was my cousin’s bachelorette party and she wasn’t feeling it anymore.

It was probably about midnight on Saturday when we showed up to Barrel Room, so we got stuck paying a $10 cover. Not sure if it’s cheaper before a certain time or what, but $10 to dance for a couple hours is a little high in my opinion.

Once inside, we waited for our entire party to get in so we could maneuver our way onto the dance floor. My cousin and I are standing there, and I see this chick walk up behind my cousin (who happens to be the bachelorette), and attempts to dump her drink on her. Thankfully her friends stopped her beforehand and told her to knock it off, otherwise, she would have gotten a punch to the beav. There’s just no reason for people to act like douche-bags. If you can’t handle your liquor, stay your ass home. Don’t try to ruin someone else’s night because you’re not having any fun.

My cousin didn’t even notice, because it was behind her back, so I tried not to let that ruin my night. We get out on the floor, or cement rather, since the club is situated outside under a tent with a DJ booth and 2 bars on each end, and proceed to find an area where all 8 of us could dance comfortably. It was pretty packed, but that’s to be expected on a late Saturday night.

I loved the music, it was more my style of hip hop, top 40s, electronic/dubstep mixes. If that’s not your thing, then you may want to go elsewhere, but it’s something that can easily be danced to.

I didn’t get a creepy vibe from any of the guys coming up to me asking me to dance with them, I just kindly turned them down if I didn’t want to and they went on there merry way. I am married, so I don’t need anyone grinding on my ass. It’s just awkward and uncomfortable. Now if you want to dance with our whole party, that is just fine! There were numerous guys that stepped inside of our circle and showed us how it’s done. And the Harold lookalike from Harold and Kumar, if you happen to stumble upon this, thanks for making an effort to dance with our whole group, you were insanely awesome!


Drinks were a bit on the pricey side so I only bought a couple here. $9+ a drink, if I wouldn’t have known better, I would have thought I was in Vegas. But, the music and the dance area make up for that. It’s nice and refreshing to be outside and not in a stuffy building where you get the stench of b.o. wiped on you by passerbys.

I will probably be back the next time I feel like dancing, but I will definitely be drinking beforehand to avoid the price of booze here!