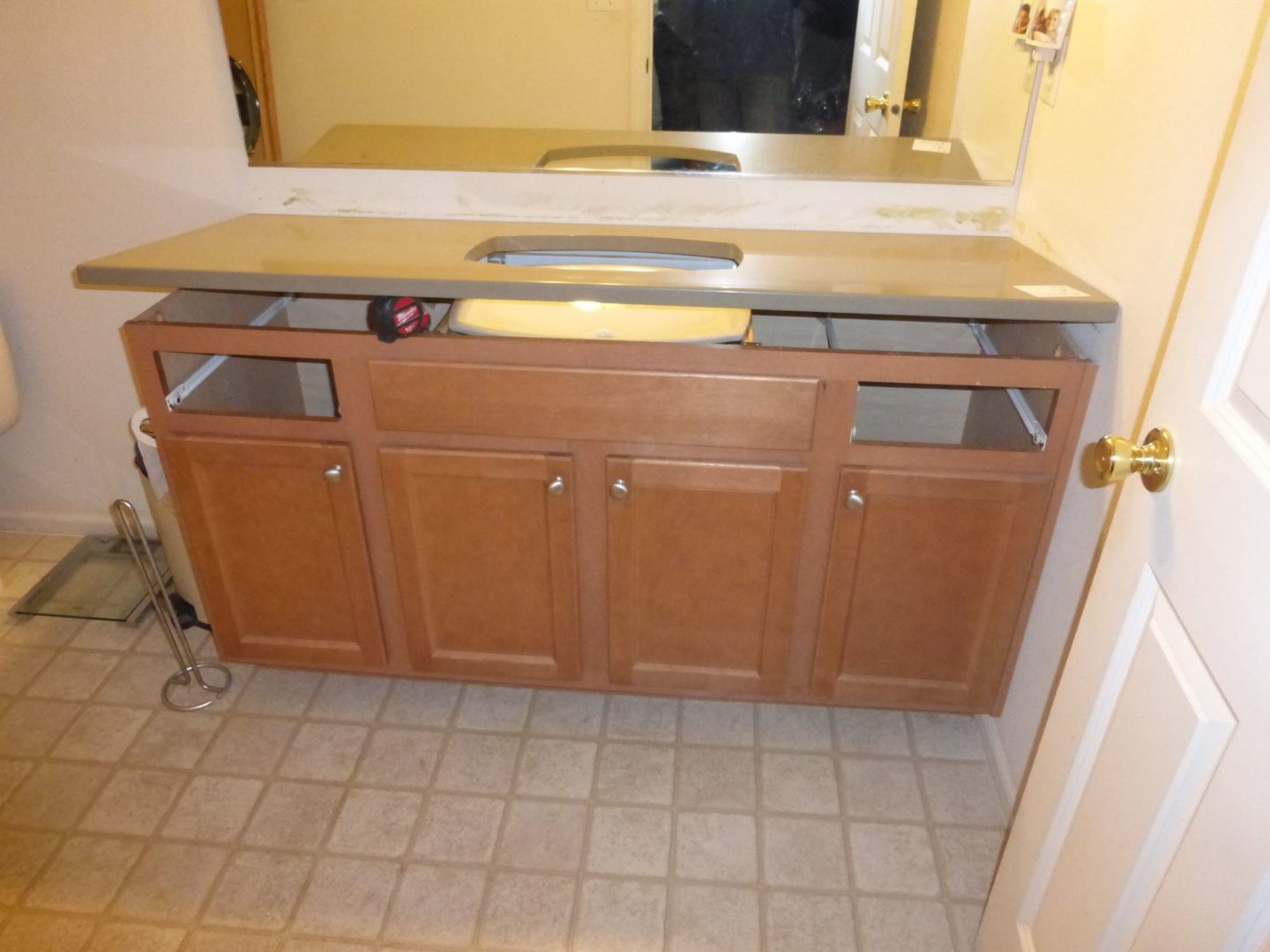 It’s probably been about 2 weeks since our bathroom has been finished and I haven’t really had the time to update or show you the end result because I’ve been practically living in it. Okay maybe not because of water bill reasons, but I certainly wish!

We decided to hire my husband’s friend from his gym to do the work, and although they had lots of requests waiting, we decided to put our name on the list due to the quality recommendation. But, it certainly was worth the wait, because it’s AWESOME!

Here’s a little before photos to give you an idea of what it looked like. Basically your standard grade builder crap. 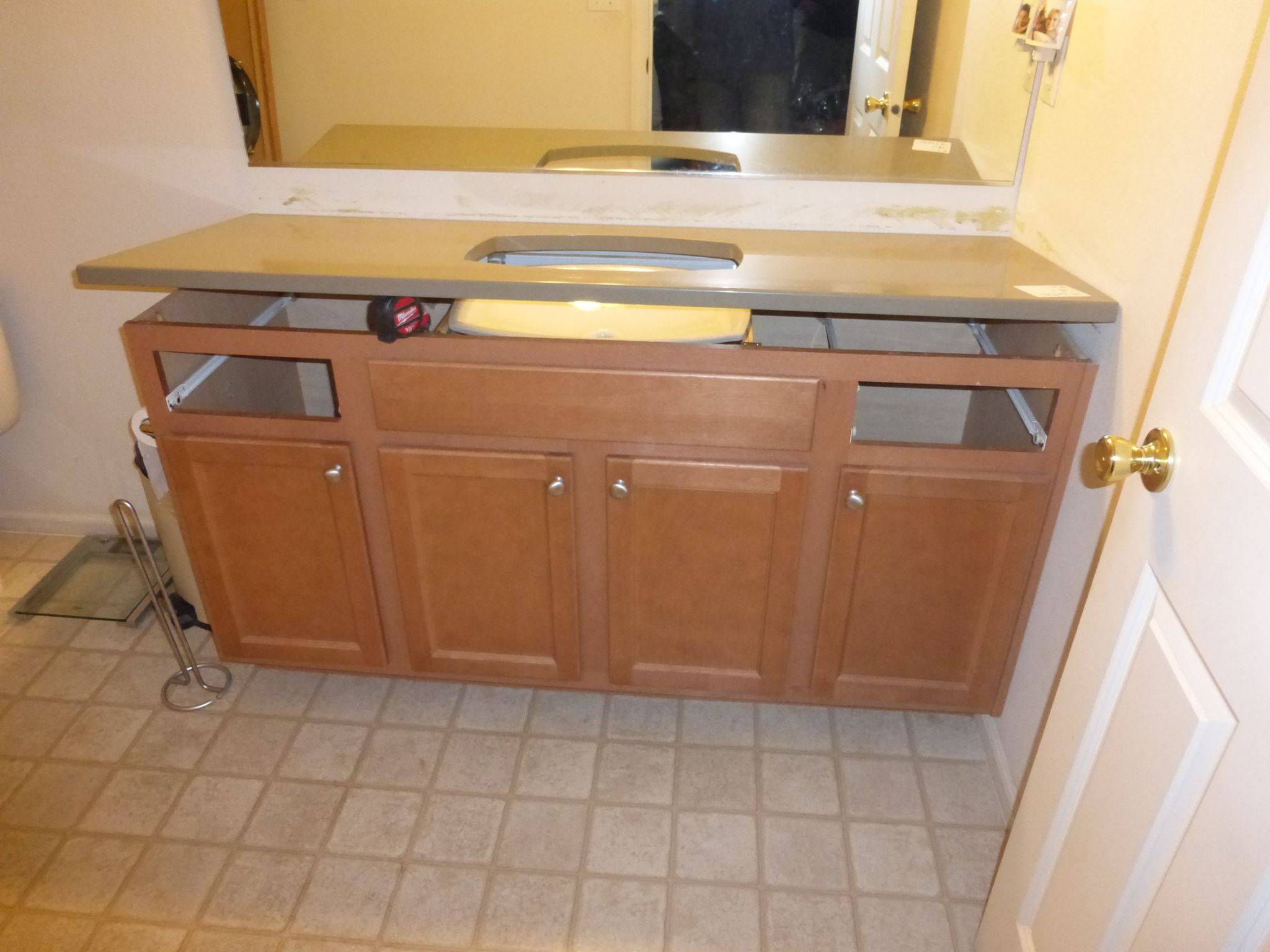 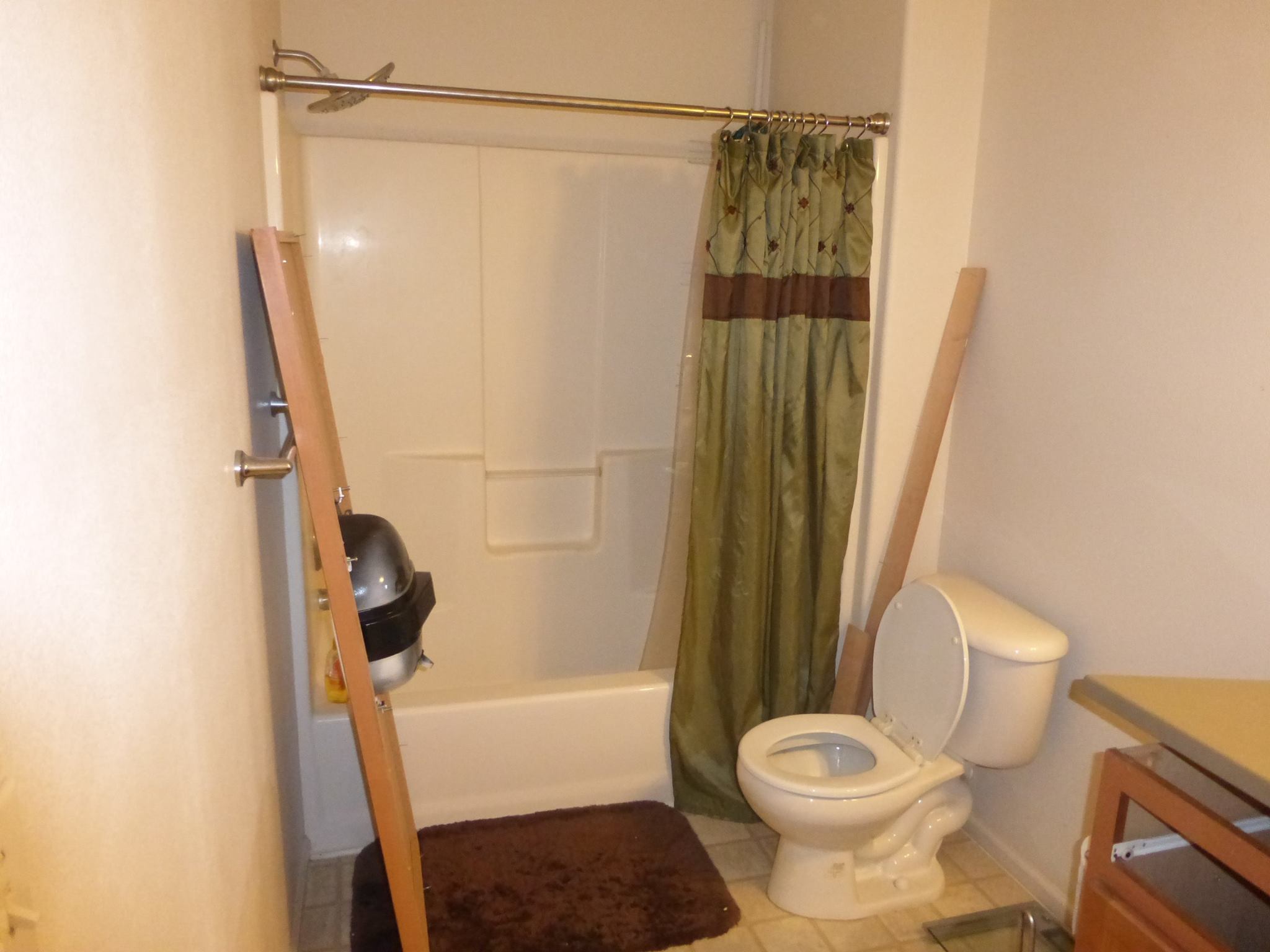 The countertop was already being replaced at this point as you can see.

Our crappy laminate floor. OMG, I hated this stuff since it’s so hard to keep clean and look good!

And now onto the work in progress. 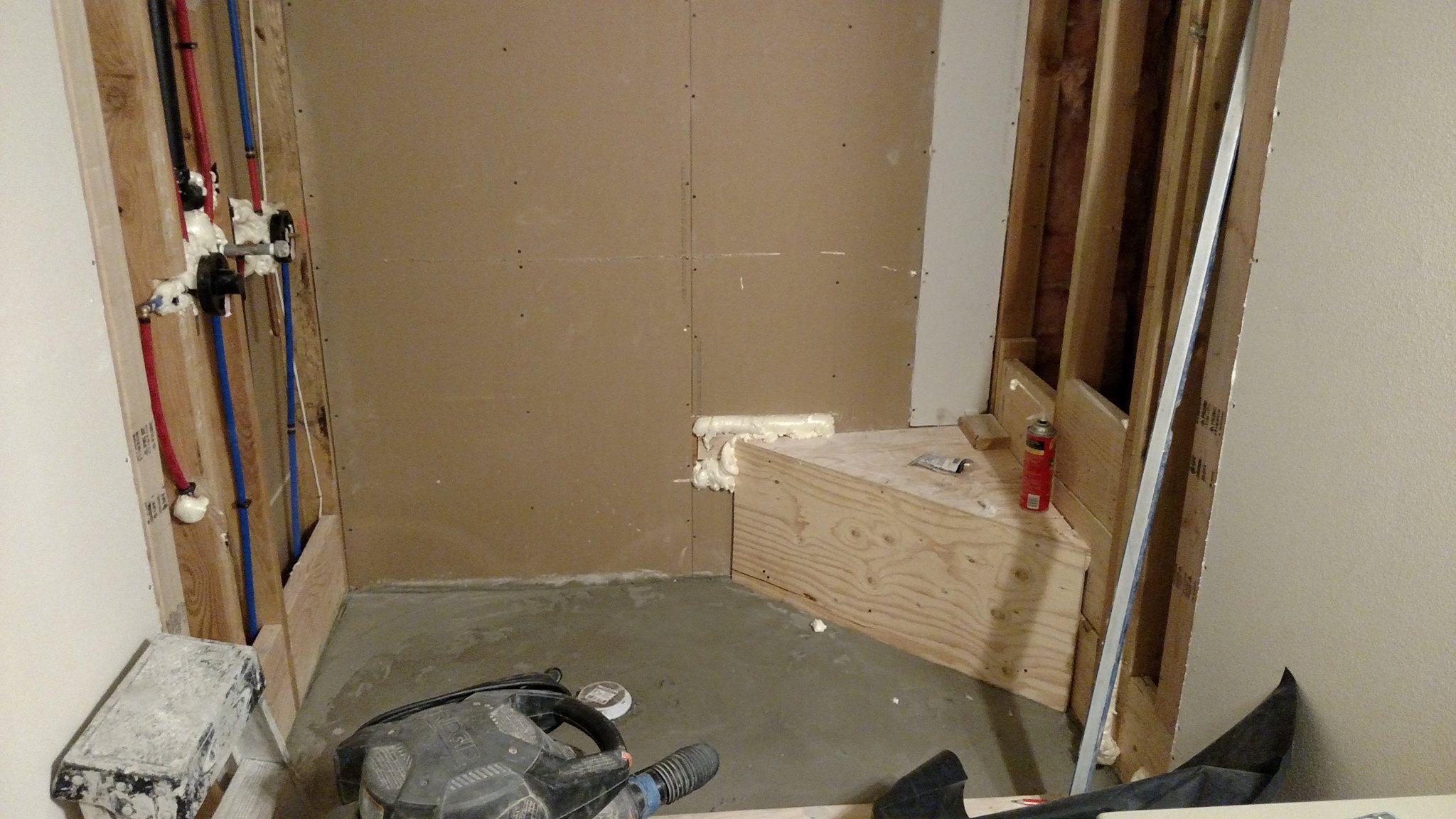 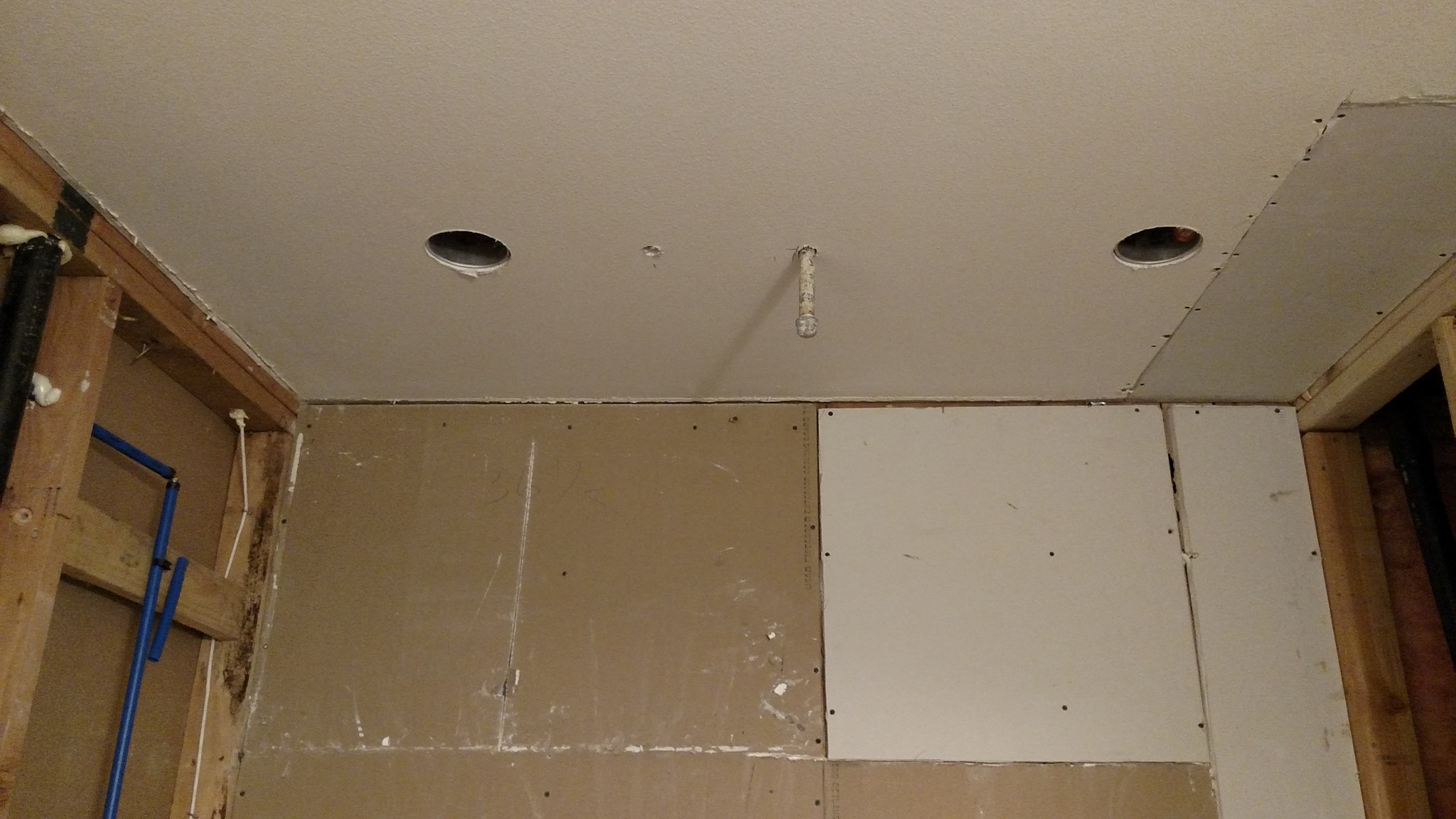 Looks completely scary, but what do I know about home remodel.

Our friend the contractor suggested that we have ceiling lights put in which I think was a great idea because we don’t have natural light in here and not enough light from the vanity area to output towards the shower. So it would have been way too dark. And as you can see, we’re having a shower head come out through the ceiling as well. Can’t have a nice shower without a rain shower head, can you? 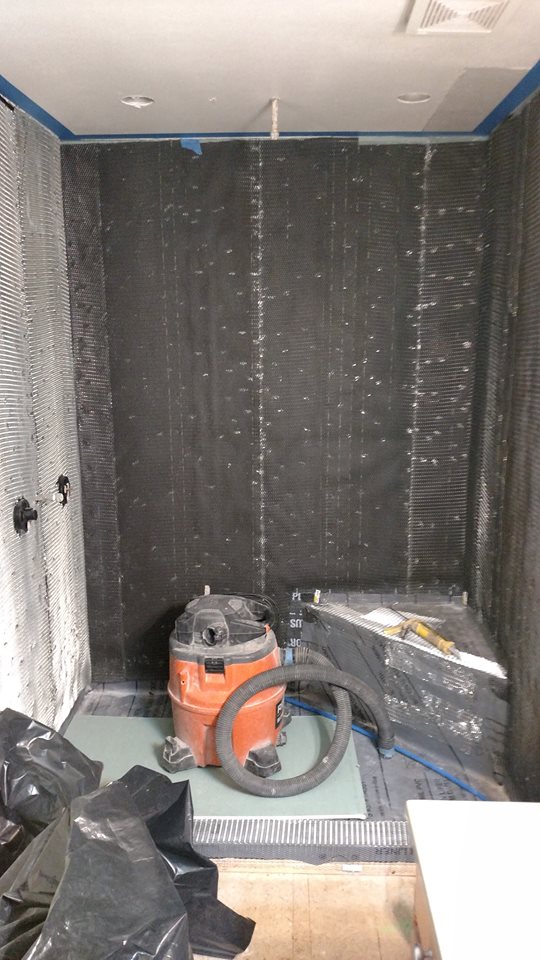 Also, a recommendation by our contractor was to put in a bench. I almost think we made it a little too big but he asked how big we wanted it. I guess you just don’t realize how big something will be until it’s all finished. But there’s still enough room in there for my husband and I to both shower at the same time. The bench definitely makes it easier for my pregnant butt to shave my legs, so that’s a plus. 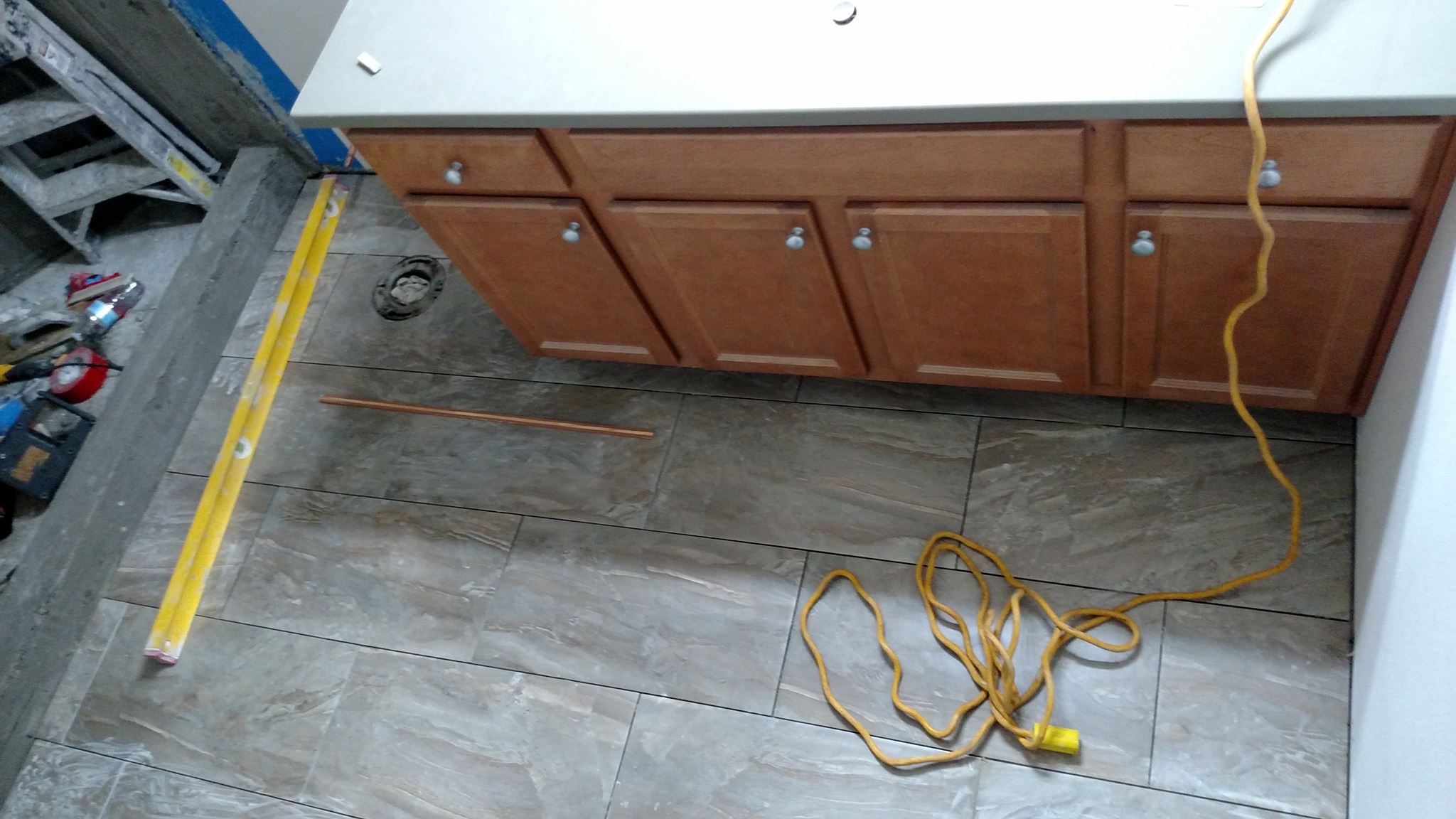 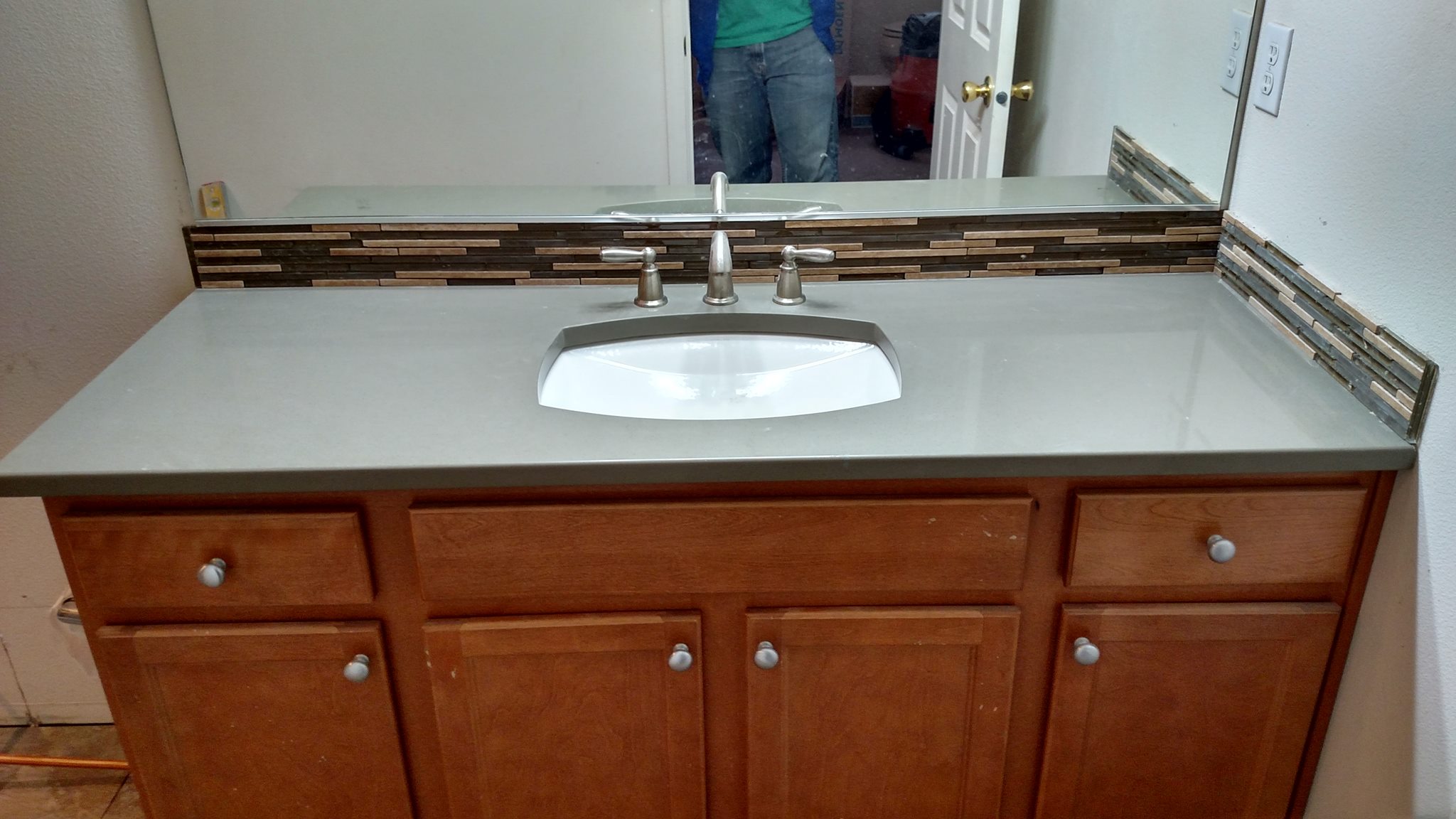 We spotted this porcelain tile at Comfort Interiors in Vancouver, WA and both my husband and I loved it, so we figured we need to plan around this to make it work as good as possible. The funny thing was when we went back to make sure it was the actual tile we wanted, another couple was in there and found the same one out of all the tile and wanted to borrow it as well. It’s obviously a very good, eye-catching piece of tile.

We also wanted porcelain tile because it’s easier to keep clean. We had it cut in rectangles and going in the opposite direction of the shower to break up the pattern a bit since we’d be using it in there as well.

And finally a couple weeks after they started, it was finally finished.

Here’s the complete remodel of our master bathroom minus the bathroom mirror frame that I need to keep nagging my husband to do. LOL

As you can see, the mirror desperately needs that frame. I think it would make it look 100% better if it did. And if you didn’t notice, we kept our original cabinetry since they were fine. We did upgrade the knobs to a brushed nickel finish though. Cabinetry is not cheap and we already knew we were spending way too much with the other stuff we ordered. 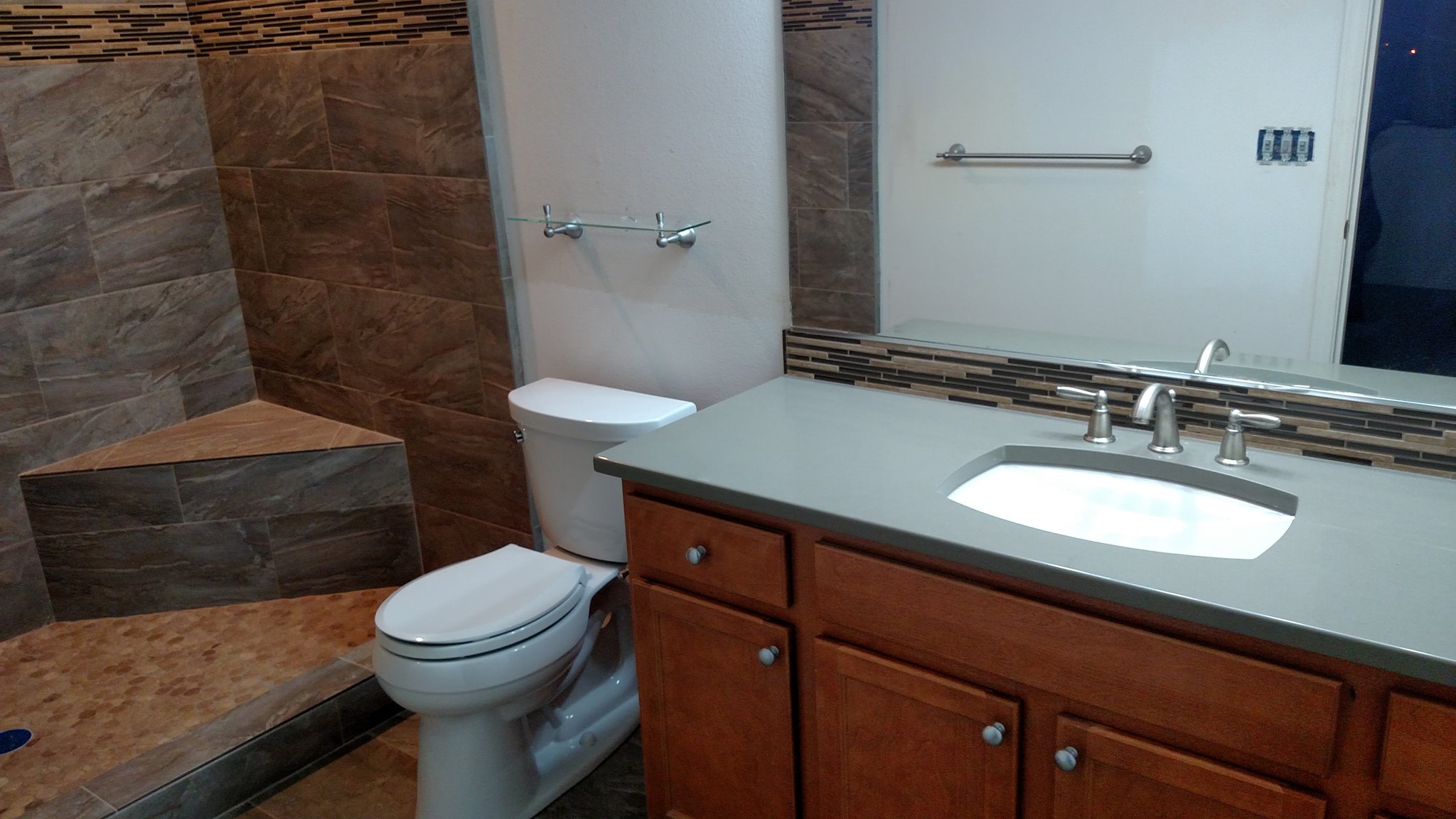 We did paint the walls even though you can’t really tell because my husband chose the lightest gray possible since he didn’t want it to be “too dark” in the bathroom. I think it needs more color since it looks too white. I mean the paint swatch was called a stone white. But, we’ve already spent enough money, so the walls will have to wait again until a later date.

And our shower in all of its magnificent glory. 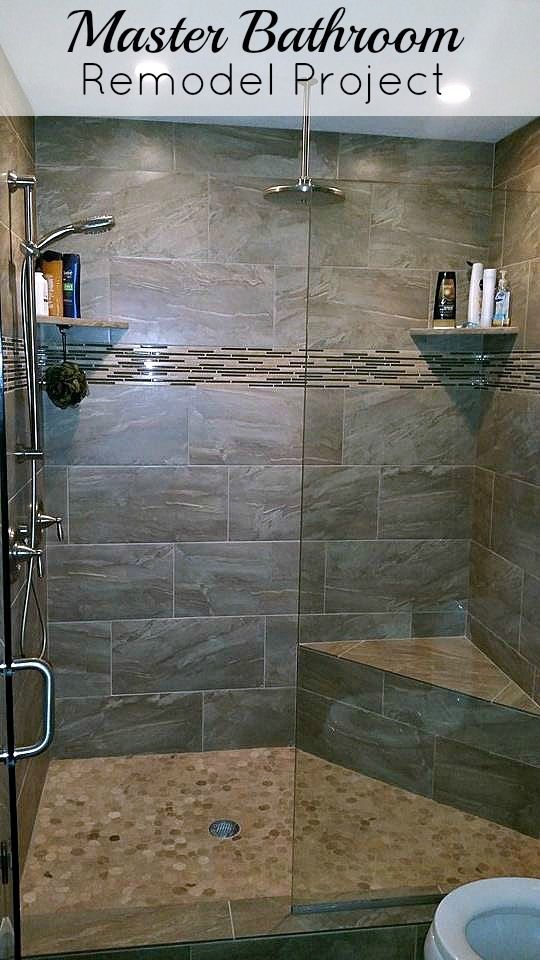 Now we no longer feel like taking a shower is a chore!

And it’s definitely nice to have more room and not have to step over a tub ledge when you’re 8 months pregnant.

Don’t worry, we still have a second bathroom with the same crappy tub in it for when the baby comes. We know that a tub is a must-have for resell value, but hopefully, this will bump up our value as well. Not thinking as much as we invested into it, but maybe one day, IF the market keeps coming back up.

I’m now looking for more ways to decorate in here, but if my husband had his way, nothing would be in there at all except the basic necessities. Pfft.

Just need to get our room looking nicer to go along with this nice looking master bathroom.