My sister about a month ago asked if I would take her Guinea Pig, because she would no longer be able to take it and keep it at her new apt, as she already had 2 cats and a small dog. I figured what the hell, my cat could use a new friend, since she gets lonesome sometimes. 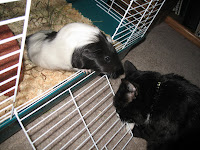 They were great at first, but now my cat is starting to be a little more playful than Roxie (the guinea pig) likes. My roommate says that’s a total stripper name, but I don’t care. Yasmine isn’t exactly a cat’s name either, but I dig it and so does she. 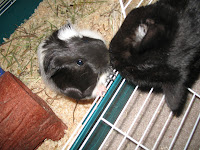 My Yasmine was spayed when she was a youngster, so she never got a chance to have any kittens. So, now she treats Roxie as her baby, and Roxie is not happy about having Yazzy’s wet tongue all over her. In fact, she starts chattering her teeth to tell her to get the hell away. It’s so amusing to see two different animals interact though.

I’ve been snapping a lot of pictures, since every time I’m near Roxie or have her cage open, Yasmine has to be right there as well. 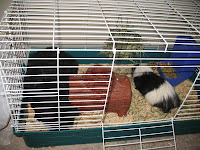 My sister informed me that she would be inexpensive and low maintenance, well that was wrong! This pig, shits out 20 tiny little pellets, like every 10 minutes. So you have to be right there cleaning her cage out, or it starts to get way messy and smelly. Damn her! 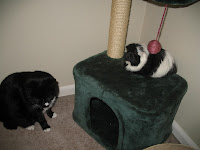 I don’t mind having her, but I like things low maintenance right now or I would be having a million kids. Okay so maybe only one or two. But, obviously I want ME time, not PIGGY time. Does that sound selfish, even though it’s really not all that bad?

I think Roxie would do well with a bigger cage and another piggy, but damn their cages are close to a hundred – which is too damn spendy for my tastes. I would like her to have a friend though since I think she would be a little happier, instead of just sitting in her cage. I do take her out quite a bit, but not as much as she would like – I’m sure.